If I Were A Goddess

Hello, my lords and ladies! I don't usually do challenges, but this one I got from Kaino is so epic that I'll make an exception. Dear lords and ladies, may I present you...

Rules are as follows:

1. Tag back to the person who tagged you.
2. Answer the questions.
3. Add a question if you come up with a good one.
4. Challenge five other bloggers

So, first of all let me begin by telling you whad kind of goddess I would be. I would most certainly be The Almighty Unicorn Goddess of Fire and Ice. This is because even though my horoscope states that my element is water, I have always, ever since I was a little girl, thought that this must be some kind of terrible cosmic mistake and my element is really, truly fire. (Later I have learned that this is apparently so because Mars was rising when I was born.) I hate cold, but I would also be a Goddess of Ice, since coldness is the first impression many people seem to get from me. As a Goddess I would also hate cold and ice, but I could not escape my destiny as a goddess for both hot and cold, and this would lead to me being a very angry, pissed off and hard-to-please goddes indeed! Any tiny error from my worshipers, and I would cast the world into a glorius chaos! I would of course have two unicorns as my heavenly mounts - I mean, really, you could not expect me to settle for only one unicorn! One would have red, blazing eyes and fiery mane and tale, and his hooves would make embers flying around whenever they touched the groung. The other would have bright blue, freezing gaze, and his mane and tail would be made of snow, whirling aroung him like a storm even when he stands still. Both would be able to fly, of course. When I would be in a particularly ugly mood, I would ride a carriage with both of my unicorns pulling it. 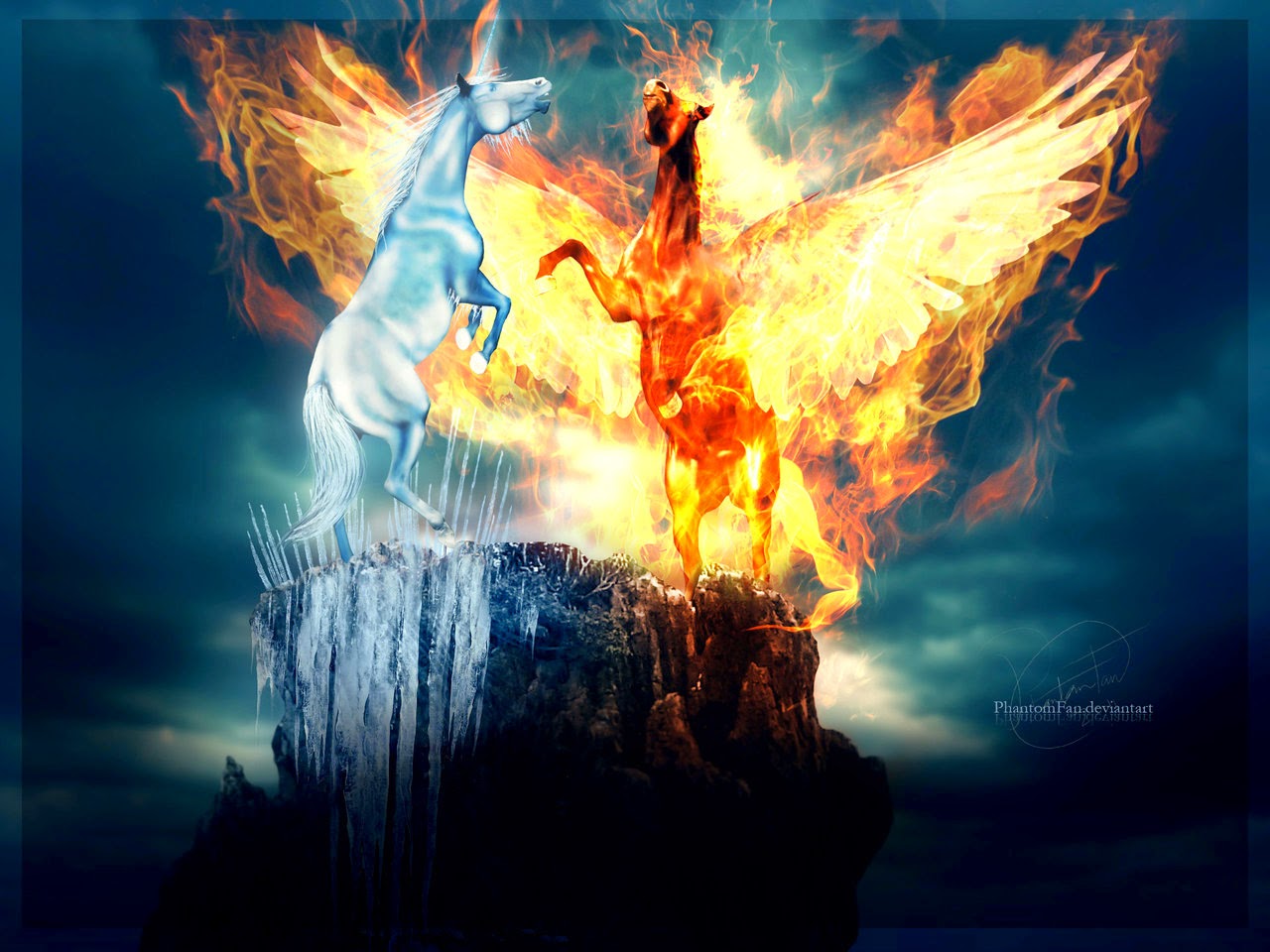 Yes, here they are, my babies! They don't always get along, though. (Picture credit: Foolishsunsets) And might I just add - if my mounts are like this, wait 'till you see me as a goddess. Juuust wait.

So, on to the questions.

1. The global warming thingy will kill lots of stuff. You get to save one species and have to kill another. Which ones and why?

I would definitely save humans, because a goddess without worshipers is nothing! And it's handy to have them around, if I should ever want to take a human lover - isn't that what gods and goddesses do in all the interesting legends (Christianity, not talking about you now). I would also save the unicorns - what are you saying, I can't save two species, who are you to tell me what I sould do, I am The Goddess of Chaos! And I would destroy whichever species has pissed me off most during the last 24 hours. Oh wait, that might very well be the humans... certainly I could never be mad at a unicorn, or anything cute and fluffy, like bunnies. 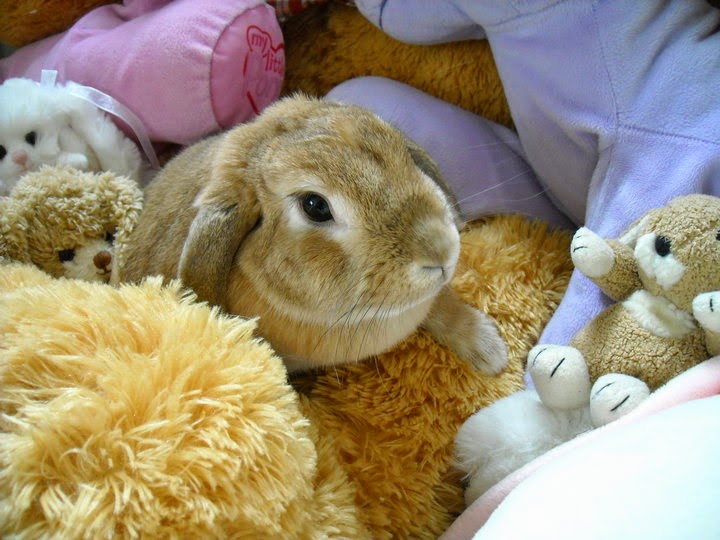 2. Ok, since you are playing god, make a prayer your worshipers would have to prey every evening.


I think Katy Perry had it right:

"You're hot and you're cold
You're yes and you're no
You're in, then you're out
You're up, and you're down
You're wrong when it's right
It's black, and it's white"

But let's forget about that part about kissing and making up, 'cause there's no making up with me. Maybe instead something along the lines

"But it's all okay
There's no other way
We know you'd kill us anyway
If we disobeyd."

You may sing it with the Katy Perry's song's tune, if that makes you feel better, my insignificant humans.

3. Nice and poetic that one. Now, any sacraments you would want to have?

My sacraments would be as follows:

Being Heavenly Pissed Off and Throwing Things Around
Being Heavenly Happy And Petting The Heavenly Unicorns
Being Heavenly Pleased With A Good Cuppa Tea
Marriage (Why, of course, I am such a romantic person!)
The Tea Time of The Goddesses (also known as The End Of The World) 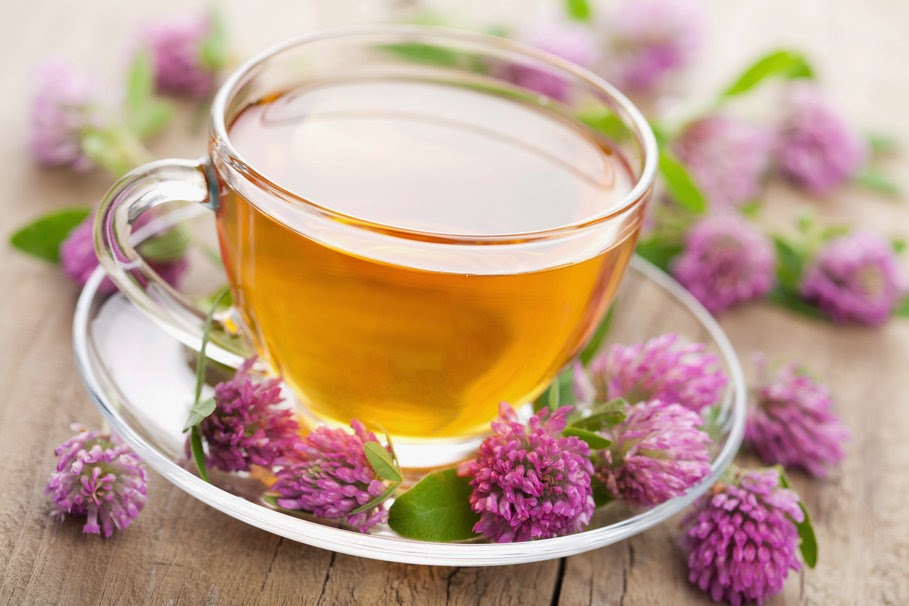 4. I like this theme. Three annual ceremonies that would be held to celebrate you?

I would let my miserable humas have their Christmases and such as long as it is stricly about being with their loved ones, over eating, buying useless gifts to each other and putting out silly little Christmas lights. If there's anything about baby Jesus or any other god, though, I would be heavenly pissed off. My seremonies would be:

The Feast of Fire, that would be held during Midsummer's Eve - so I'm taking over Midsummer anyway, it seems - when my worshipers are required to stay up all night, watch my beutiful sunset and sunrise and truly appreciate it or else, light huge bonfires in my honour and sacrifice white roses for me by throwing them into the fires.
The Petting of The Heavenly Unicorns, held 10th of November each year, because that is the day that I was born and Mars was rising and it pleases me to spend the day with my unicorn darlings. My followers would all have a fluffy unicorn toy which to pet during this celebration, and while petting it they would think about my cute little - nay, my enormous, scary, bad tempered mounts and be thankful that they would never have to try and pet them (as if they would ever dare to dream about such a thing). I would also require all sorts of offerings - food, tea, flowers and designer shoes - to be sacrifised for me during this feast, as it is my birthday after all.

The Celebration of Ice, held during the darkest day of the year. My followers would have to light thousands of candles in my honour and drink lots of high quality tea and truly appreciate the tea, or else. They would also sacrifice the best of teas for me by throwing them into the icy waters of the thousands of lakes in Finland. Flowing candles in the lakes would also please me greatly. I would not require them to appreciate the cold, the darkness and the ice, though, because even I could not be that heartless. 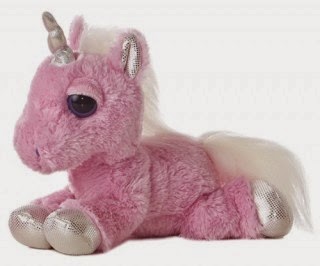 5. Just in case you become a god, what sacrifices we mortals should offer for you for a good weather and such benefits?

Well, as already said above: white roses, good tea, delicious foods (especially macarons!) and designer shoes. I don't do any benefits, though; the sacrifices will only keep me from destroying this World of yours. 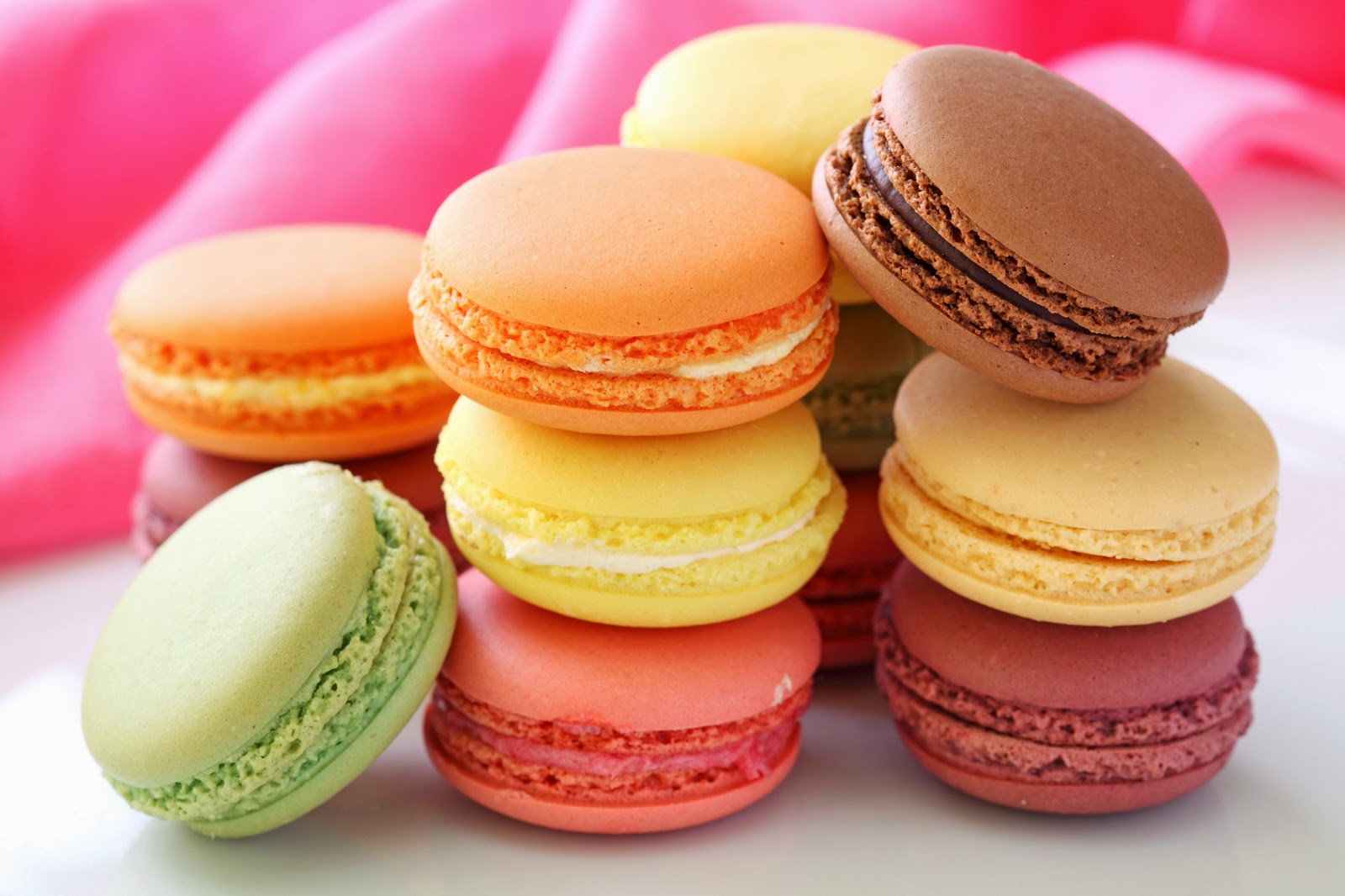 6. Since there are the five of you playing gods, check each others blogs and tell us what kind of gods you think the others would be like according to their blogs.

Rinna would be The Goddess of Saving The World, Spending Moderately and Not Byuing Things We Do Not Need. Naturally, as such, she would be my mortal enemy.
Mimi would be The Epic Vampire Goddess of Night, Moon And Starry Skies, and we would get along just fine, as night suits my chaotic tastes. We could even enjoy some blood of the virgins together sometime!
Asio Otus would be The Goddess of Turtles, Tortoises and All Dolls Ever Made, and I would like her, too, because dolls are creepy to many people. The turtles might confuse me, however.
Elfie would be The Goddess of Ballet, Colourful Pointe Shoes and Fluffy Tutus. She would be too kind for my tastes, so I might dislike her.

7. With which god of the other four would you most likely ally yourself with if needed?

Why, with  Mimi, of course! Together we would wrap the world into eternal night and chaos just because we were bored and felt like doing so. But hey, it would be so much fun - for us two.

8. Since there are five to choose from to worship, why would your supporters choose you?

Because if they won't, I will cast the World into the chaos mentioned a few times before.

9. Tempting! What rules should the followers of your cult follow?

10. How would you end the World when the time comes? Your take on the apocalypse?

The Tea Time of The Goddesses is the end of the World. When all five of us goddesses would gather together to enjoy some tea (or in the case of Mimi, blood of the beautiful virgins), it means that the World is about to end. I would get mad at Elfie for having a cuter outfit than I do, and I would rally around in my carriage throwing things around and screaming. Then I would set the world on fire so hot it would turn everything into ashes. (The positive side to this would be that no one would be able to feel anything as the fire would be so intense.) After that, I would freeze the ashes. After that I would burn the ashes again for good measure. After that I would turn the ashes of the World into a splendid diamond, set it on white gold and wear it as a ring. 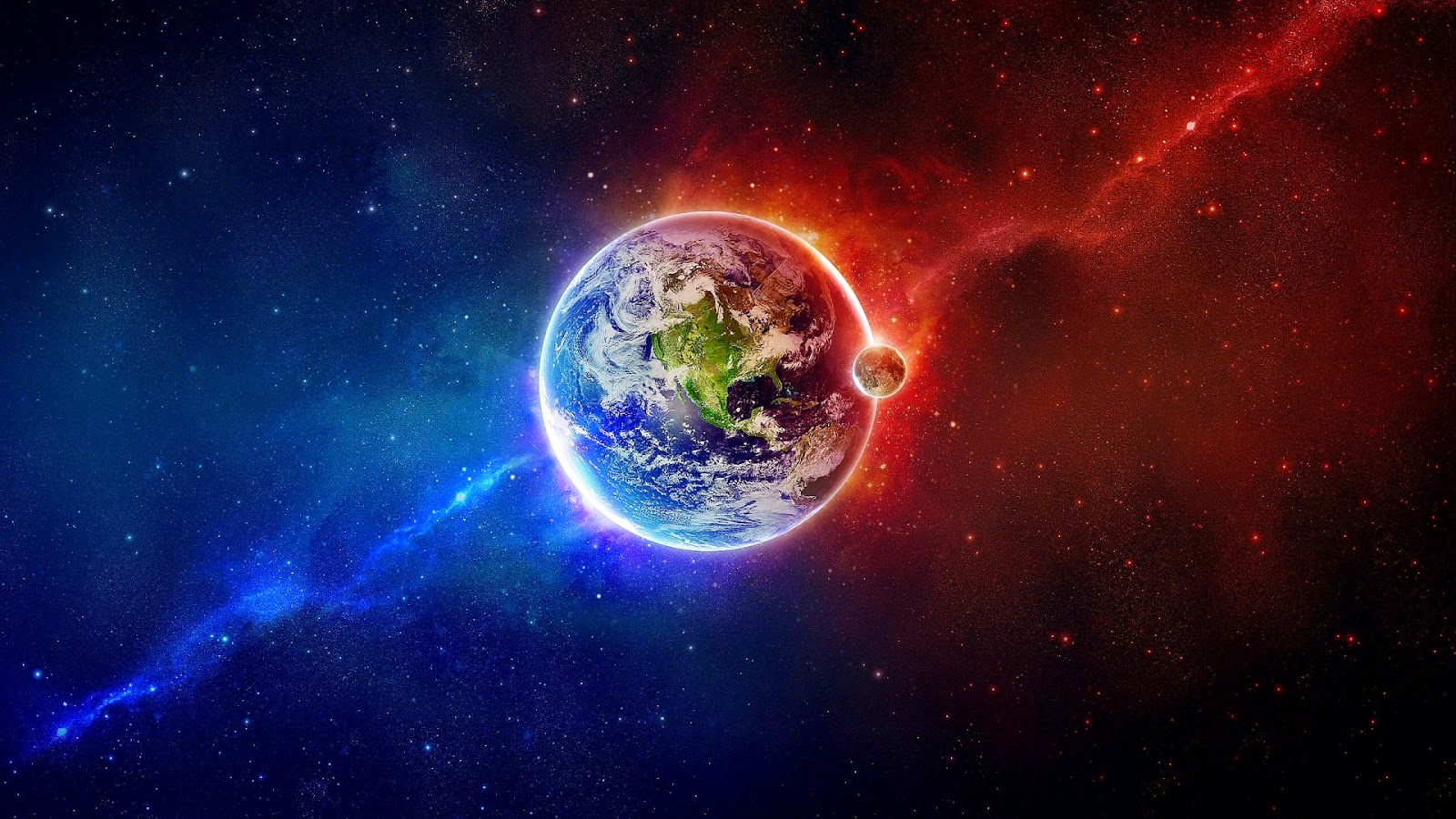 11. Ok, the World is ending, what will you offer as the after life?

Oh, it will be so sweet! I promise to always be in a good mood! There will be fluffy, pink bunnies and unicorns for everyone to pet and to ride around with. There will be an eternal tea party with all the treats you can possible imagine, and the tea would be from another world (well, literally) and it would never run out. Everyone will get cute outfits (though not as cute as me, of course) and designer shoes (though not as many as me, of course). Everyone will get a castle of their own (though not as fabulous as me, of course) and there will always be either Spring, Summer or Autumn but never Winter. The Autumn colours would last all the way to another gentle Spring. In the after life, I won't have to really work anymore and I will be much more nicer when I can just relax and chill. ♥ 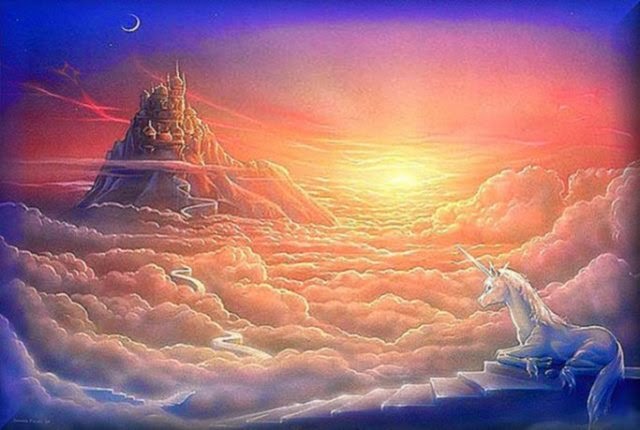 So, I will challenge Kata, Hanna, Tiia, Sanni and Hanna-Katariina. I won't add any questions because 1) it took me forever to even answer these and 2) this challenge is perfect as it is. It has even the end of the World covered, what else could you ever ask for? ;D

Questions, ideas for new posts, or something else to say?
You can send me an e-mail to
newvoguechildren [at] outlook [dot] com.

ATTENTION: Do NOT use any of my pictures or writings from this blog elsewhere without asking my permission first! Thank you.