Yesterday we had another teaparty together, this time at Mimi's! Mimi had made this wonderful cake: 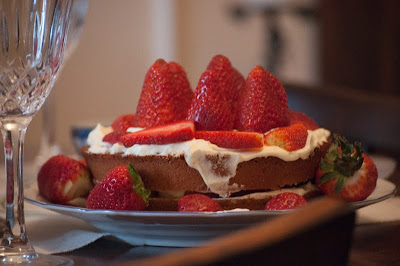 My outfit for the day was Baby's Tiara Brocade with the blouse I found at the fleamarket. 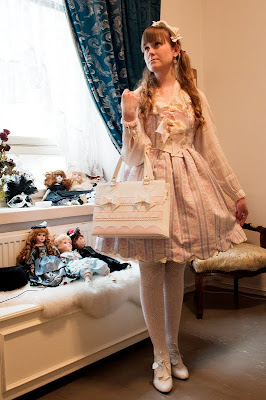 I really adore those lace ruffles on the collar. My hair looks quite awful because once again it was raining cats and dogs in Lahti. It always rains when I go to Lahti... :< 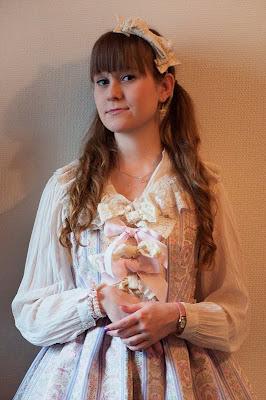 I also wore my new leather gloves, also from the fleamarket. I love how elegant they look, and they also go perfectly with my winter coat. 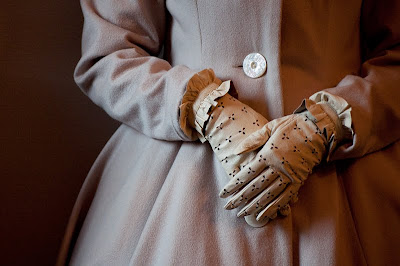 Today me, my boyfriend and one of my best friends went to a second hand market place. I was very lucky and found many cute things. 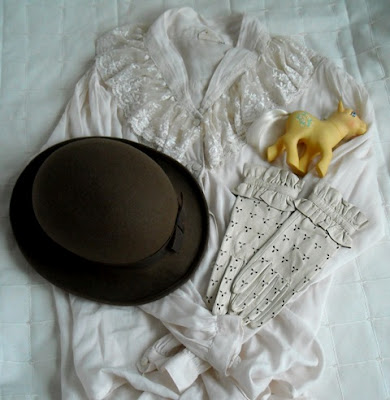 That white blouse I bought because of the lace. It's too big for me but I'll see if I can fix it somehow. The brown hat is vintage from the 60's, I love it - it will look nice with Innocent World dresses. I also found perfect leather gloves with ruffles. And lastly, that poor My Little Pony from generation 1. I will have to rip her head off and see what's going on inside - there will be tail rust at least, that much I can tell from the outside already. I'll have to fix that too.

All in all, I had a nice day and I'm very happy with my findings.
Lähettänyt Caramea klo 9:20 ap. 16 kommenttia:

Spring in my heart

"Winter comes, I walk alone, I want no birds to sing.
To those who keep their heart their own, the Winter is the Spring."
(I wish I could remember who wrote this poem, I find it very lovely.)

The weather has been sunnier during the last few days, and even though it’s still quite cold and very snowy, I’m starting to dream of Spring. During the last days I’ve also dreamed of wearing a little bit more classical lolita, with maybe some sweet influences still in it. The more time goes by, the more I start to love the colors I once used to dislike – shades of brown, even grey. More natural shades of white (off white, cream, ivory) I have loved for long time now. I have also noticed that I don’t actually care, if everything in an outfit matches perfectly together, as long as it looks nice.

You all know by now I have hardly time to wear lolita (insert sad sighs here) but now I'm stuck home sick with the flu, so I do have time to make some coordinates at least! I dug deep inside my wardrobe and shoe mountain to see, if I could make the kind of coordinations I have been thinking of – and yes, I could. I'm glad that I don't have to buy a whole lot of new clothes in order to make a little more elegant outfits. I made many coordinations, but these four are my favorites. 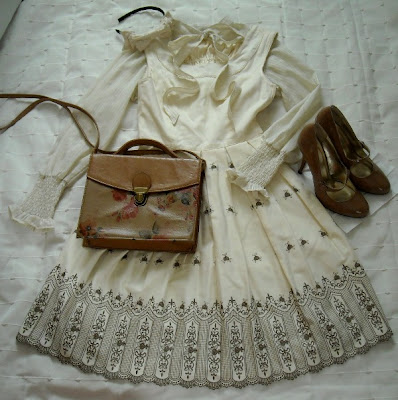 Innocent World’s Rose Embroidery JSK and headbow, with shoes and purse I purchased in London. With this outfit I would also wear beige lace tights, but it’s impossible to take a decent picture of them. 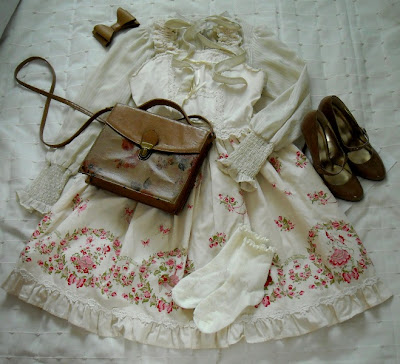 Baby, the Stars Shine Bright’s Thumbelina JSK with brown accessories and anckle socks with little ruffles on them. I wish it was warm enough for bare legs already... 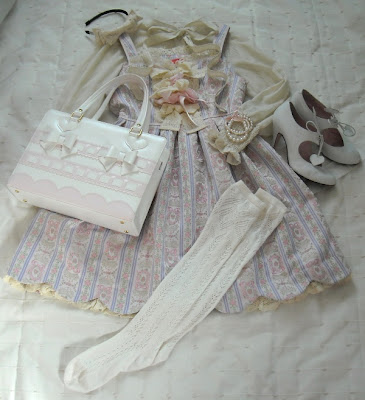 Baby, the Stars Shine Bright's Tiara Brocade JSK with Innocent World headbow, Baby purse, Minna Parikka shoes and lace socks. I love how Tiara Brocade can be both sweet and classic depending on how you accessorize it. Baby, the Stars Shine Bright’s Music Salon JSK with Innocent World headbow and vintage/ offbrand accessories. I added black shoes to this outfit to get a little bit old school feeling to it.

Which coordination is your favorite? And what kind of styles and outfits you wish to wear this Spring? ♥
Lähettänyt Caramea klo 2:10 ap. 26 kommenttia:

Of Ponies and Lolis

I have a scandalous confession to make. I like My Little Ponies and I like lolita fashion. I have watched (and will continue to watch) every single episode of Friendship is Magic. I started collecting My Little Ponies from all generations years ago. There, now it’s said. And now you can jugde me all you want, right? Well, no.

Watching Friendship is Magic or collecting Ponies doesn’t make one childish. To me, watching Friendship is Magic is far less childish than making anonymous secrets or comments about someone who likes to watch it. Let’s face it: as lolitas we wear dresses and headbows and jewellery that are completely weird to most of the people out there. Actually collecting Ponies could be considered far less weird by society.

Frankly, I just can’t understand all the hatred towards those (lolitas and non-lolitas) who like Ponies lately. I like lolita and I like Ponies, but these are just two of my many hobbies and to me they have nothing in common – though if I could get my hands on a lolita dress with MLP print on it I would purchase it, wear it and look fabulous while doing so.

Does liking My Little Ponies make me a worse lolita, or a worse human being? With this logic, my other non-lolita hobbies such as painting, writing, drawing and reading books should make me a worse lolita too, right? It just doesn’t work that way. I hope that Pony haters can realize that no matter what your other hobbies are – be they MLP-related, or thai boxing, or football, or anime, or manga, or collecting stamps – you can still like lolita, too, and be amazing at it.

Lolitas get so much negative attention as it is. You all know it; I bet every loli here has been laughed at, pointed at or yelled nasty things at while simply walking down the city streets minding their own business. So why must lolitas start attacking each other as well? We should rather stick together and fight the prejudices, not create more of them.

Let all lolis have all the hobbies they want. Don’t take it so seriously if someone likes something that you don’t. :)

And in the end, have some Ponies and a bunny. 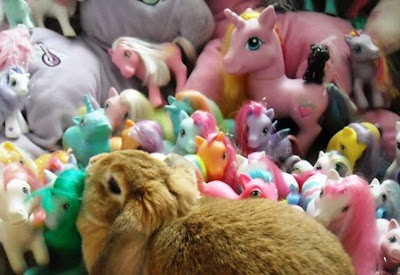 Hello, lovely ladies! The wonderful and talented cake… wait, jewelry maker Essi from Essin maailma was so kind to sponsor this giveaway on my blog! Today is the International Women’s Day, and what better way to celebrate this than a giveaway with these girly & cute Vohveli sankari (Waffle Hero) earrings? Be sure to check out Essi’s website for more sugary cute jewelry. 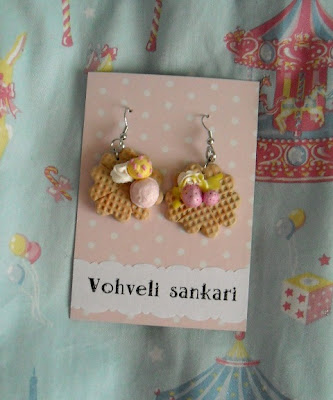 How to enter this giveaway:

♥ You must be a public reader of New Vogue Children.
♥ Post Essin maailma’s website link to your blog, Twitter, Livejournal, Facebook etc.
♥ Leave a comment with a link to your post as a proof. Remember to leave your e-mail address too!
♥ To earn an extra point, also link this giveaway to your blog and post that link to your comment also.
♥ You can get maximum of two points, and each point means one vote for you. I will choose the winner at random.
♥ The giveaway will close after a week, on Thursday 15th March.
♥ Good luck!
Lähettänyt Caramea klo 6:37 ap. 6 kommenttia:

Marianne is a Finnish candy, and now Angelic Pretty has officially decided it's a very cute one. :D I do admit the papers look rather chic, but I don't like the candy itself so much. 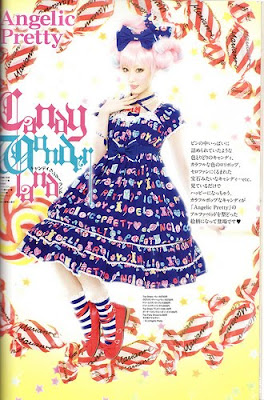 This week's Thursday is International Women's Day, and to celebrate that there will be a little giveaway with a super sweet (and I really mean it's so sweet looking you could almost eat it!) prize, so remember to come back later this week! ;)
Lähettänyt Caramea klo 4:01 ap. Ei kommentteja:

Questions, ideas for new posts, or something else to say?
You can send me an e-mail to
newvoguechildren [at] outlook [dot] com.

ATTENTION: Do NOT use any of my pictures or writings from this blog elsewhere without asking my permission first! Thank you.